In May 2015, the Leicestershire & Rutland Family History Society organised a most enjoyable visit to Berlin. The focus of the visit was Berlin during WW2 and we were accompanied by Bill McQuade, a specialist military historian.

We travelled by coach, with an overnight stop at Essen both travelling out and on our return. Although this was a long journey, it did emphasise to us how far it was for the armies to get from France to Berlin, and we realised we were driving through “Happy Valley” in the Ruhr, where  there were the heaviest anti-aircraft defences. 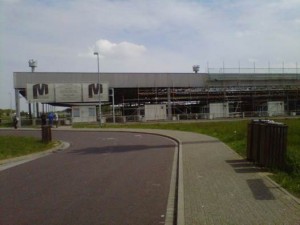 We also experienced going through Checkpoints Alpha and Bravo on the approach to Berlin through the former Eastern Germany. Our guide had first-hand experience of serving in Berlin during the Cold War so we were able to learn about what life was like at that time. After what could have been a very lengthy delay at Checkpoint Alpha, the military convoys would have to drive at a steady 55 kph all the way to Checkpoint Bravo, otherwise they would be interrogated to ensure that no detours or illegal stops had been made. They made sure the vehicles were in good working order before setting out as they did not want to have to account for breakdowns!

Our guide pointed out several things of interest en route: the old racecourse stands that still flank the main road into Berlin, the USA training area, the Radio Tower used by Hitler etc. and talked about the Berlin Airlift.

Our first full day in Berlin was spent visiting a WW2 war cemetery with more than 3000 graves. Most were the graves of the RAF, whole crews buried together, and some Prisoners of War including Michael Sinclair (The Red Fox from Colditz) and Denys Street (The Great Escape). 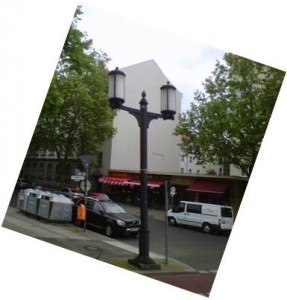 We drove back into the city along Heerstrasse, which had street lights personally designed by Hitler – reputedly sketched on a napkin. We spent time at the Olympic Stadium, the Victory Column, the Staufenburg Monument, Topography of Terrors outdoor museum, the Holocaust Memorial and the site of Hitler’s Bunker. Several of the group visited the Kaiser Wilhelm Memorial church which is the remains of the bombed church with a new bell tower and church joined to it. It is known as the “blue church” due to its lovely blue stained glass windows, or as the “lipstick and powder box” by locals due to its shape.

For me, the most moving part of the tour was when we visited the Wansee Conference Centre, which was where the senior officials of the Nazis met to discuss and decide on the “final solution” for the Jews. It was chilling to see the original documents displayed alongside an English translation, recording the comments and recommendations of those planning the forced evacuations to camps (“able-bodied Jews will be brought to those regions to build roads, whereby a large number will doubtlessly be lost through natural reduction”), forced sterilisation for part-Jews and other ideas for coordinating the destruction of the Jews in Europe. 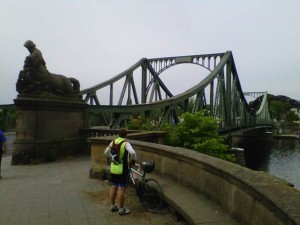 We walked along the Glienicker Bridge where spy exchanges were made during the Cold War. Then followed a more light hearted visit to the Cecilienhof 1945 Conference Centre and the Sans Souci Palace, with its beautiful architecture and park lands and Frederick the Great’s tomb, scattered with potatoes. We lunched in Potsdam and could view either a Soviet war cemetery or go shopping. Other highlights of our tour were seeing the Brandenburg Gate, the Reichstag, looking at memorials to those killed crossing the Wall, the Soviet Memorial and the Checkpoint Charlie Museum. We had plenty of free time to explore: we decided to go to the ghost station at Nordbahnhof S-Bahn and the Wall Memorial Museum , which has a very interesting short film about the Wall’s defences and how it was constructed.

We certainly saw and learnt a lot during our 6 day tour; thanks to Peter Cousins of the LRFHS for organising this. We are looking forward to joining another tour next year.

Part of the Wall at the Topography of Terror Museum

The Chinese House at Sans Souci Palace in Potsdam.

A copy of the original artwork which was on the West German side of the Wall.

The tomb of Frederick the Great. It has become a traditional to lay a potato on the grave as a mark of respect.