Herbert Schofield and the University: a lecture by Dr G Malcolm Dyson 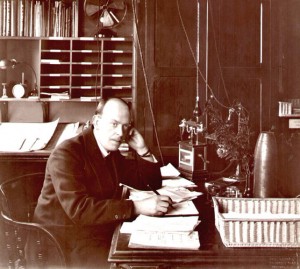 In one of a series of lectures on Charnwood’s heritage given at Loughborough Library in the late 1970’s, Dr G Malcolm Dyson, a Professor of Chemistry and leading staff member at Loughborough College from 1928 to 1938, shared recollections of Herbert Schofield and the role he played in advancing education in Loughborough and the fabric of the town. We are very grateful to Mike Gane (Emeritus Professor of Sociology) for sending this to us.

Joining Loughborough’s Technical Institute as its Principal as Britain entered the second year of the Great War, the 33-year-old ‘eccentric but enterprising’ Schofield quickly developed it from an administrative body of three staff coordinating night classes across the town, to a first rate training institution occupying a largely purpose-built site along Greenclose Lane with the capacity to accommodate 800 trainee engineers.

The ability to ‘get things done’ coupled with a willingness to plan things first and worry about the details later enabled ‘Schoie’ and his ‘unholy alliance’ of influential local dignitaries to take advantage of the shortage of a workforce skilled in making precision shell cases.  Schofield used this as an opportunity to test out innovative ideas for training workers through hands-on factory work. Starting off by training female munitions workers and, later, soldiers returning from the Front, the model proved successful both during the war and after, providing skilled workers for engineering firms far and wide.  The physical and economic benefits of the developments Herbert Schofield set in motion are still evident in Loughborough to this day.

Dr Dyson rounded off his lecture with stories illustrating the character of Herbert Schofield – a hardworking, indomitable man who set himself the task of ‘building an institution of engineering training second to none’ and bent every available resource to this aim.  Whilst this could make him a ‘hard man’ with a ‘tendency to autocratic centrism’, Dyson also described Schofield as someone who trusted his staff and left them to get on with their job – as long as they kept him informed of what was going on.  ‘Not the conventional portrait of a great man,’ Dyson stated, ‘but […] the man as we knew him.  He was human, he was forthright and we all loved him for it and worked as hard as possible to […] help him secure his cherished objective’.  That objective was the ‘unique engineering university’ for which the town is so well known and which, Dr Dyson concluded, would never have existed ‘but for the indomitable persistence and courage of Herbert Schofield.’

You can watch the restored black and white archive lecture here. 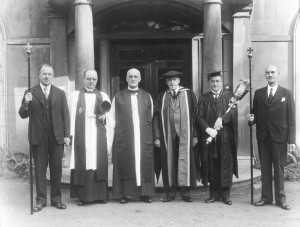 Herbert Schofield (third from right) beside Geoffrey Fisher, Bishop of Chester, outside All Saints’ Rectory on College Sunday, 1938. To the left of Bishop Fisher stands the Reverend William John Lyon, Rector of All Saints, Loughborough from 1934 to 1958.

Do you have information, photographs and recollections of Herbert Schofield which could be added this feature?  If so, please email history@lboro.ac.uk.