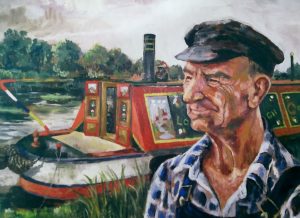 Jack Monk, lock-keeper, painted beside ‘Owl’ by Jennifer Harker sometime in the 1970s

‘Having just bought a second-hand, fibreglass canal cruiser, my husband and I were very fortunate to find a good mooring close to Bishop’s Meadow Lock in Loughborough, where we met the lock-keeper, Jack Monk.  His narrowboat, ‘Owl’, was moored just between our boat and the lock.  From the moment we met him I knew that I wanted to paint his portrait.  His face was full of character and weathered by hard work out of doors.  Very obligingly, he stood next to ‘Owl’ which I sketched in roughly as I concentrated on Jack.

Having been born and brought up on the working boats, Jack was very knowledgeable about life on the canals – legging through tunnels, loading and unloading etc.  He spoke of horses used on towpaths for pulling barges.  One day, Jack invited us on board ‘Owl’.  I remember a gorgeous smell coming from a small oven.  It was a tray of pork spare ribs cooking for his lunch.  One of the interesting decorations in ‘Owl’ was a white glazed pottery plate with holes around the edge through which ribbon was threaded.  Everything was ‘squared away and shipshape.’

Working on the canals was a ‘year-round occupation’, when families had to cope with winter rain, ice, snow and fog.  It was hard work at the best of times and those with young children must have had a difficult time of it.’

Read an article by Loughborough resident David P, himself a canal enthusiast, about the history of canals.

Did you know Jack Monk?  Would you like to add your memories to this feature?  Email Alison at lboro.history.heritage@gmail.com