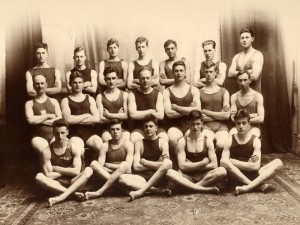 Claudia Parsons was third in the two-lengths Ladies’ Handicap just behind her friend Dorothea Travers. A ‘Miss Jalland’ was the winner. Claudia had only just learned to swim when she arrived in Loughborough. In her autobiography she writes:

‘The Loughborough swimming-bath was handy and almost deserted in the hours reserved for women, but I had barely taught myself breast-stroke when the College took over the baths for an afternoon gymkhana. As there were only two female entrants for a Ladies’ race, I was persuaded to enter, but on hearing I had only just learned to swim they gave me such an extraordinary advantage that I won it. There was a good deal of laughter when I received a small silver cup’.

This doesn’t square with the reports of the first Annual Swimming Gala in ‘The Limit’ (the College magazine) but Claudia did in fact come first in the Ladies Handicap in the Second Annual Gala in 1921, where it was reported that Miss Percy ‘in spite of her heavy handicap’ was a close second. Claudia’s memory was obviously not entirely accurate when writing her autobiography nearly 70 years after the event!

‘The Limit’ also commented that the second gala …

‘… was extremely well patronised, many failing to get into the building at all. The Queen’s Park Baths are really too cramped in their arrangements for the presence of spectators, and this point should receive the attention of the Baths Committee.’

Eventually the College built its own open air bath on the playing fields site, mostly with student volunteer labour. It was finished and in use in 1929 and officially opened by Col Robert Martin (Chairman of the County Council) on 19 July 1930.

As well as swimming races and diving, the first Gala included Water Polo, a Tub Race and a ‘Cigarette, Pyjamas and Candle’ Race. The Second Gala also included ‘Cock Fighting’, which seems to be swimmers mounted on barrels, carrying mops and trying to knock each other off. This was, perhaps, a variation of the ‘Tub Race’ mentioned above.