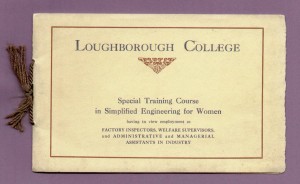 The call for educational institutions to encourage women to progress in the study of Science, Technology, Engineering and Maths (STEM) subjects is not a new one, as the following article by Loughborough University Archivist Jenny Clark shows:

In 1930 the Deputy Chief Inspector of Factories, Miss Hilda Martindale, toured universities throughout the country to recruit more women to the male dominated Factory Inspectorate. Realising that many women were hampered by a lack of technical knowledge, she made a special visit to Loughborough College, which had successfully trained female munitions workers during the First World War. She persuaded the Principal, Herbert Schofield, to put on a new short-course specifically aimed at ‘giving women employed in industry a working knowledge of machinery and engineering processes and terminology’.

The ‘Special Training Course in Simplified Engineering for Women’ opened in 1930. It lasted twelve weeks, half of it being spent on practical work in the College Workshops. From the enrolment forms in the University Archives we know that many of the women were graduates; one even held a PhD. A few had a little practical work experience in factories, most had none at all. One employer, Cadbury’s, paid for a number of its workers to be trained. In all, 44 women completed the course up to the beginning of 1940.

Many of the women who trained at Loughborough worked as factory inspectors during the Second World War, dealing with issues of safety and welfare and the implementation of emergency wartime regulations. Among them were Norah Curry who worked in Leicester and East Anglia, and Cecily Tabb and Beatrice Moorcroft who served in London. They continued their work after the war and went on to have distinguished careers as factory inspectors. 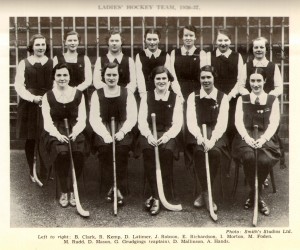 The photograph of Loughborough College Ladies’ Hockey Team of 1936-37 is from the University archives and, amongst others, shows Muriel Rudd of Liverpool, one of the students on the Simplified Engineering course. Muriel entered the College on the 11th January 1937 aged 25, following an education at Coleraine Girls High School and being granted a BSc in Chemistry from Queens University, Belfast. Her admission form notes her industrial experience as ‘supervisor in Soap Factory for a year.’

An appointment notice in the London Gazette of December 1937 reveals that Muriel became a Home Office Inspector of Factories at the conclusion of the course.

Loughborough University continues the tradition of supporting women who study and work in STEM disciplines to this day. It was one of the founding members of the Athena SWAN Charter, an initiative which encourages universities to actively address the gender imbalance prevalent across much of the scientific workforce.

The University also hosts an annual open lecture in memory of Claudia Parsons, who in 1919 became one of the first women to enroll in the College’s Engineering Diploma courses, graduating in 1922.In January 2014 the Claudia Parsons’ Lecture was delivered by Dr Maggie Aderin-Pocock MBE, a leading space scientist and TV presenter for the BBC’s ‘The Sky at Night’. Dr Aderin-Pocock spoke on the subject of ‘Women in Science: The Challenge’. You can watch the lecture online here: http://www.youtube.com/watch?v=yRWqYBsus80

Information on Claudia Parsons can be found here: http://www.arts.lboro.ac.uk/collection/featured/ and you can read her obituary in The Independent here: