On the night of 31st January 1916 four bombs were dropped on Loughborough by a German Zeppelin airship heading for Liverpool.  Ten people were killed in the raid, twelve people injured and considerable damage done to the town.

Prevented from reaching its target by poor weather, the Zeppelin is thought to have attacked Loughborough because its undimmed lighting gave a clear view of the town.  The Herbert Morris engineering works with its many roof-windows was said to be ‘ablaze with light’.  The factory was evacuated but two quick-thinking employees – Ernest Stubley and Beatrice Smith – went back inside to to turn off the lights.   Later, they each received the OBE for their bravery.

The Zeppelin went on to drop further bombs in Ilkeston in Derbyshire and Burton on Trent in Staffordshire.

In May 2014, Dr Robert Knight of Loughborough University and Mel Gould of the Carillon Museum were interviewed by Bridget Blair of Radio Leicester about the Zeppelin raid on Loughborough.  A recording of the programme they were featured in can be found here.  You can read a Leicester Mercury article about the raid which includes photographs of the damage suffered in Loughborough. 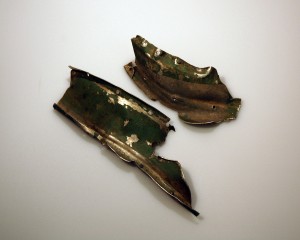 Shrapnel from the night of the Zeppelin raid, currenty on display in the Carillon War Memorial Museum. (Photo sourced from the ‘Leicestershire Revealed in a 100 Objects‘ website.)